This gingerbread cupcake recipe is a delicious addition to any holiday dessert table! These cupcakes, topped with cinnamon cream cheese frosting, will be a new holiday favorite.

Inside, these cupcakes are incredibly moist and tender, with a light and delicate crumb. The blend of spices and molasses is perfectly complemented by the thick and creamy cinnamon frosting on the top.

But these gingerbread cupcakes are my favorite holiday treat yet - and I dropped two dozen off for the teachers at my son's school and they were equally delighted by them!

The perfect blend of ginger, cinnamon, cloves and nutmeg add the right amount of spice.

Dark brown sugar and molasses add that rich gingerbread taste. These ingredients along with the oil, keep the cupcakes moist.

Hot water and baking soda add a second layer of leavening to really make these cupcakes light and fluffy.

Then our usual flour, baking powder, salt, eggs and butter round out the ingredients list for this gingerbread cupcake recipe!

Continue mixing the batter until all the flour is fully combined. The batter will be runny.

6. Finally, mix in the eggs, one at a time, until fully combined.

7. Fill each cupcake liner about halfway (about ¼ cup of batter). There should be enough batter for 23-24 cupcakes.

Place in the middle rack of the preheated oven and bake for 18 - 20 minutes, or until the tops spring back and a toothpick inserted in the center comes out clean.

9. Allow the cupcakes to cool in the tin for 5 minutes before transferring to a wire rack to cool fully.

10. Once completed cooled, frost with the cinnamon cream cheese frosting.

Beat together the butter and cream cheese until light and fluffy.

Add the vanilla extract, cinnamon and salt and mix until combined.

On low speed, slowly add the confectioner's sugar and mix until well combined. Turn the mixer to high speed and beat for 2-3 minutes until the frosting is completely smooth.

Using a pastry bag or a zip-loc bag with the corner cut off, pipe the frosting onto each cupcake.

Tip: To get a thick layer of frosting like in these photos, you will need to double the frosting recipe and use a Wilton 1m piping tip.

Dust with powdered sugar and top with a mini gingerbread man for extra holiday cheer and cuteness!

The frosted cupcakes can stay out at room temperature for up to 8 hours. They can also be put in the fridge for up to 7 days.

Allow to come to room temperature before serving so that the frosting has time to soften up a bit.

Can I use a different frosting?

You can use any frosting you want! I've tried these cupcakes with several different frostings, though, and cream cheese is by far the best match for the gingerbread flavor!

Can I use fresh ginger instead of ground ginger?

I have not tried it yet, but try it with about ½ teaspoon and let me know how it goes!

Tired of baking the same old thing every Christmas? Spice up your baking routine this holiday season with this creative take on the delicious flavors of gingerbread that we all know and love. 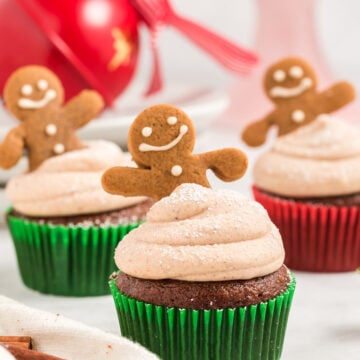 For The Cinnamon Cream Cheese Frosting

For The Cinnamon Cream Cheese Frosting