What makes a chocolate cupcake worth all the trouble? It’s not just that it tastes better than any other cake on earth. The rich, deeply chocolaty flavor and moist crumb cannot be replicated with mere cocoa powder or melted chocolate chips.

The texture is what really separates an ordinary baked good from something worthy of being called “the best ever”.

The best ever chocolate cupcakes are like warm hugs on a cold day. They’re the perfect dessert for any occasion, from birthday parties to weddings and everything in between.

The cupcake is an icon of American culture- it’s no wonder that these little cakes have become so popular over the years! So go ahead- indulge your sweet tooth with some decadent chocolately goodness today :)

How to Make The Best Ever Chocolate Cupcakes

2. Prepare a muffin pan with paper or silicone cupcake liners.

3. Place butter and semi-sweet chocolate into a bowl and place it over a double-boiler and allow it to melt. You can do this in the microwave (not in a metal bowl, though!) but it can be difficult to control. I prefer to do it over a stove, making sure the bowl doesn’t touch the water.

4. Once melted, allow the butter and chocolate mixture to cool.

5. In a medium-sized bowl, mix the cocoa powder, flour, baking soda, baking powder, and salt together until combined. I usually just quickly whisk them together.

7. In another bowl, add the eggs, sugar, brown sugar and vanilla.

8. With a stand mixer or hand-held electric whisk, together until smooth.

9. Add the cooled butter and chocolate mixture and beat again until smooth.

10 and 11. Add half of the flour mixture and slowly combine, then half of the buttermilk. Slowly mix together. If you’re doing this on a stand mixer, have it set to the lowest speed.

12. Add the remaining flour, followed my the other half of the buttermilk.

13. Mix until just combined. It’s important not to overmix or it can mix your cupcakes tough and chewy.

14. Spoon the batter into the cupcake liners, filling 2/3 of the way.

A cupcake is not a cupcake until it has been frosted, and it’s the little things in life that make a difference. In this case, this chocolate buttercream frosting. It turns an already delicious cupcake into what I consider to be “the best” chocolate cupcake ever.

This recipe for chocolate buttercream frosting is a classic, and it’s worth the extra couple of minutes it takes to make. It will be your new go-to favorite that you can use on all of your favorite baked goods.

16. Sift together the confectioner’s sugar and cocoa powder. This is essential to make sure there’s no lumps. Otherwise, your frosting will be gritty and lumpy instead of smooth and silky.

17. Room temperature butter works best. If you’ve forgotten to take it out of the fridge, pop it in the microwave for 15 seconds.

18. Whisk the butter for about 2 minutes until it becomes light and fluffy.

19 – 21: Gradually add the sifted sugar/cocoa powder alternating with the heavy cream and vanilla. Beat on low speed after each addition.

Then frost the cupcakes and top with a chunk of chocolate for the perfect finishing touch!

Can I replace the buttermilk with regular milk?

Yes, but it will alter the texture and taste of the cupcake. If you don’t have buttermilk on hand, sour cream or plain yogurt is a much better substitution.

I only have salted butter, will that work?

Yes! Just omit the additional salt in the recipe.

You won’t regret giving these decadent treats a try – they’re sure to take your sweet tooth over the edge in one bite.

If you liked this cupcake, then the same buttercream recipe works SO well on these Chocolate Banana Cupcakes too. They are my other absolute favorite cupcake recipe! 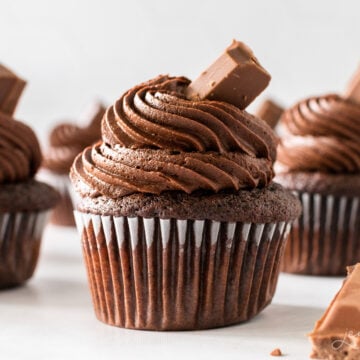 Make sure the butter mixture is appropriately cooled before moving to the next step. If the mixture is too hot, it will scramble the eggs. Do NOT over mix the batter in the final stage of mixing. Over mixing will develop gluten and stop the cupcake from being light and fluffy.  Storage: Frosted cupcakes can sit out at room temperature for up to 2 days, as long as they are stored in an airtight container, or covered.  Alternatively, you make the frosting ahead of time, storing it in an airtight container in the fridge for up to 1 week. Then, just  allow it to come to room temperature before frosting the cupcakes. 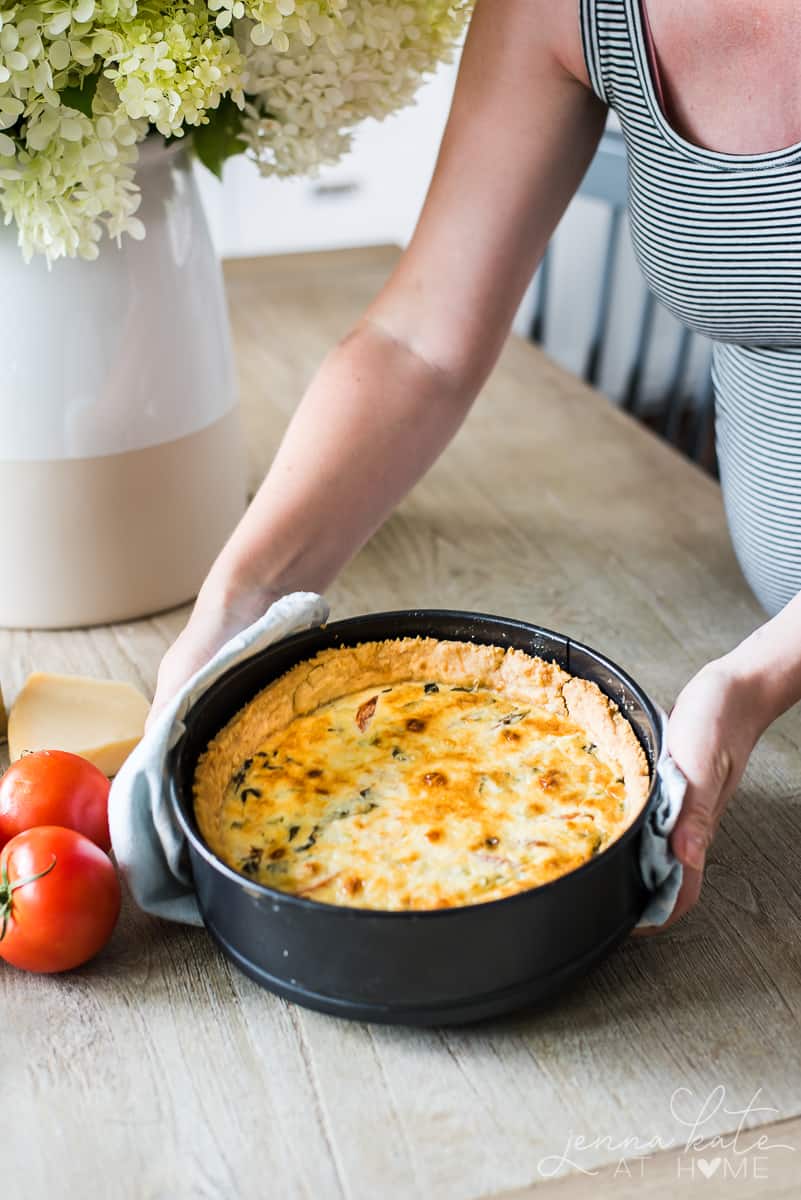 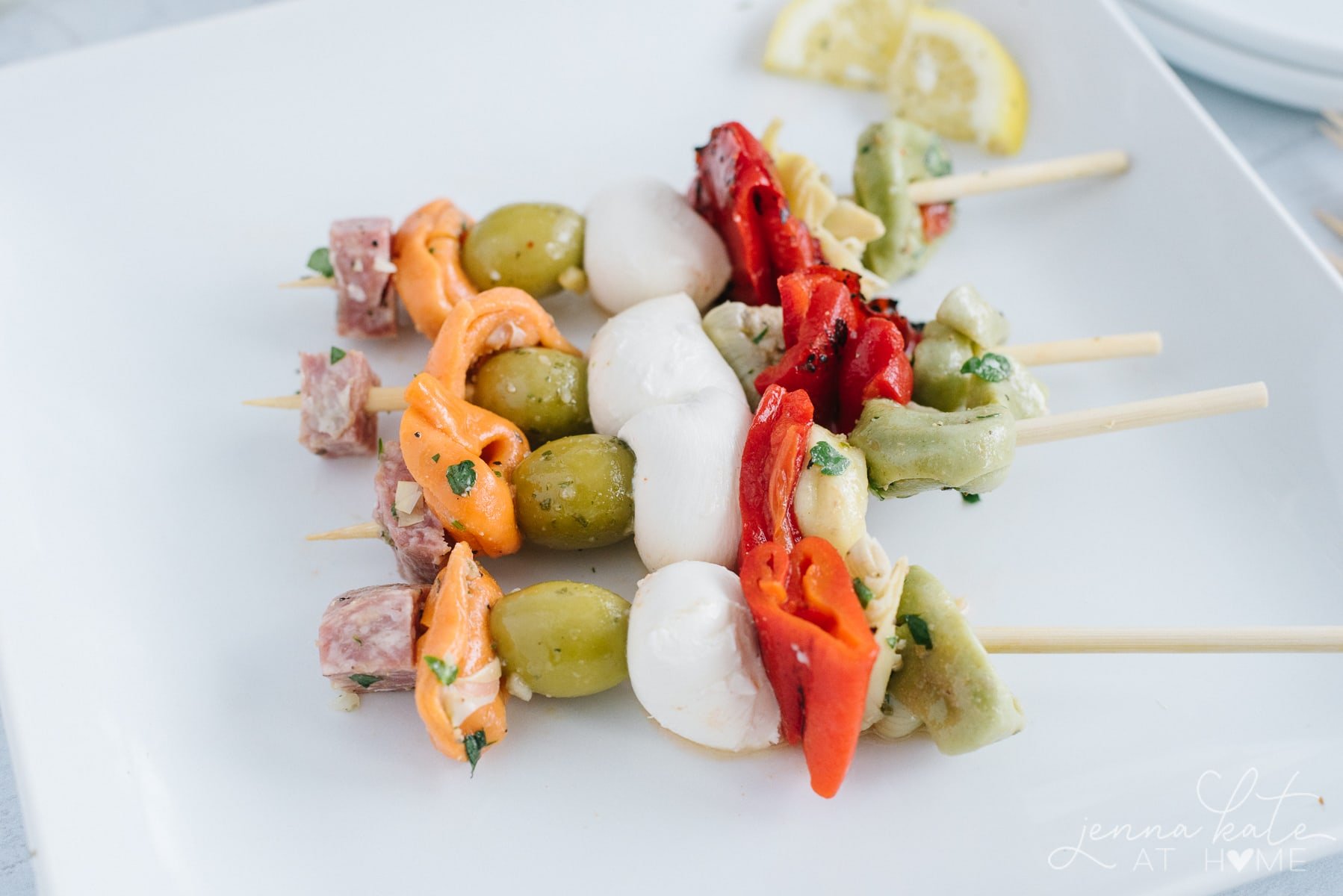 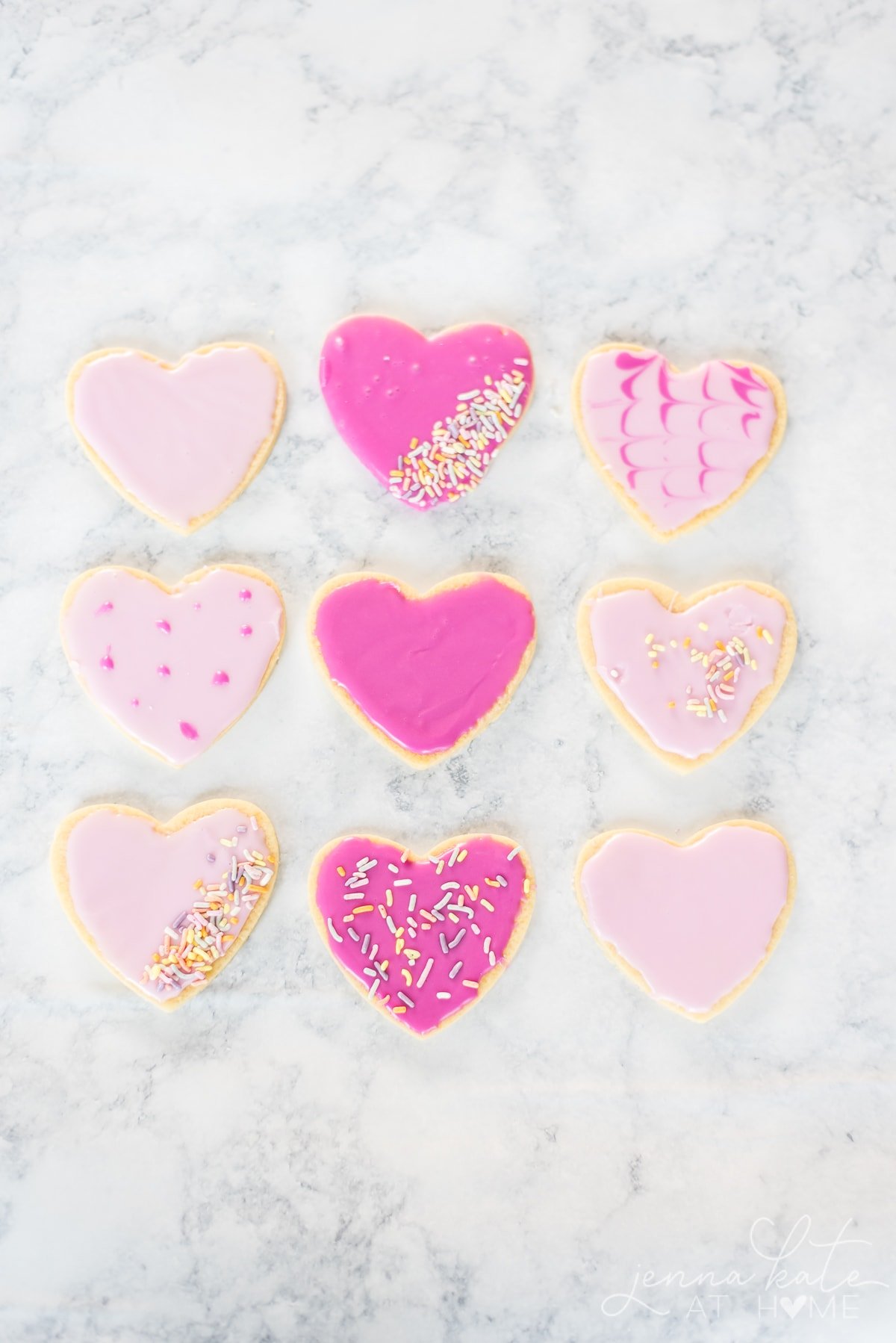 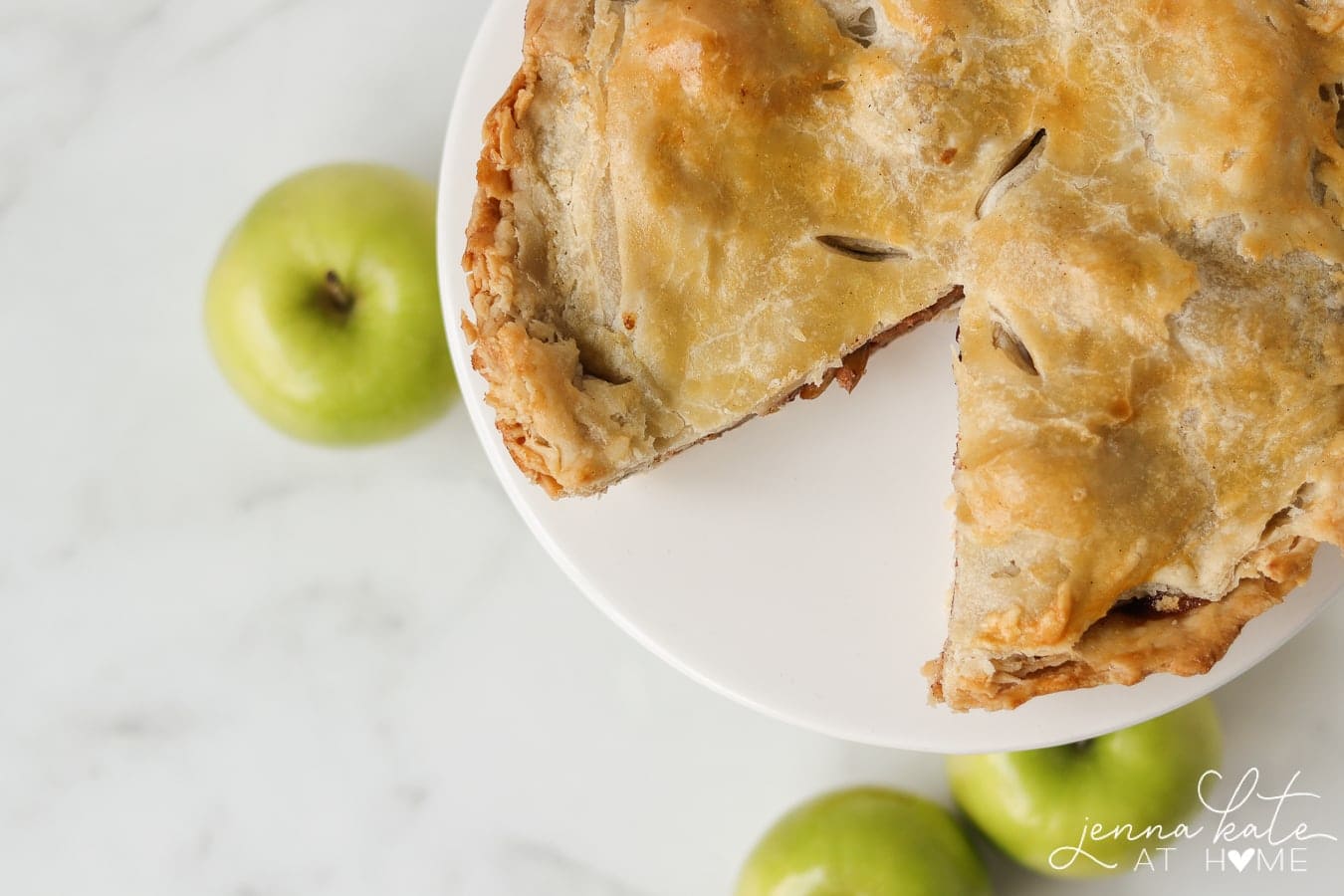 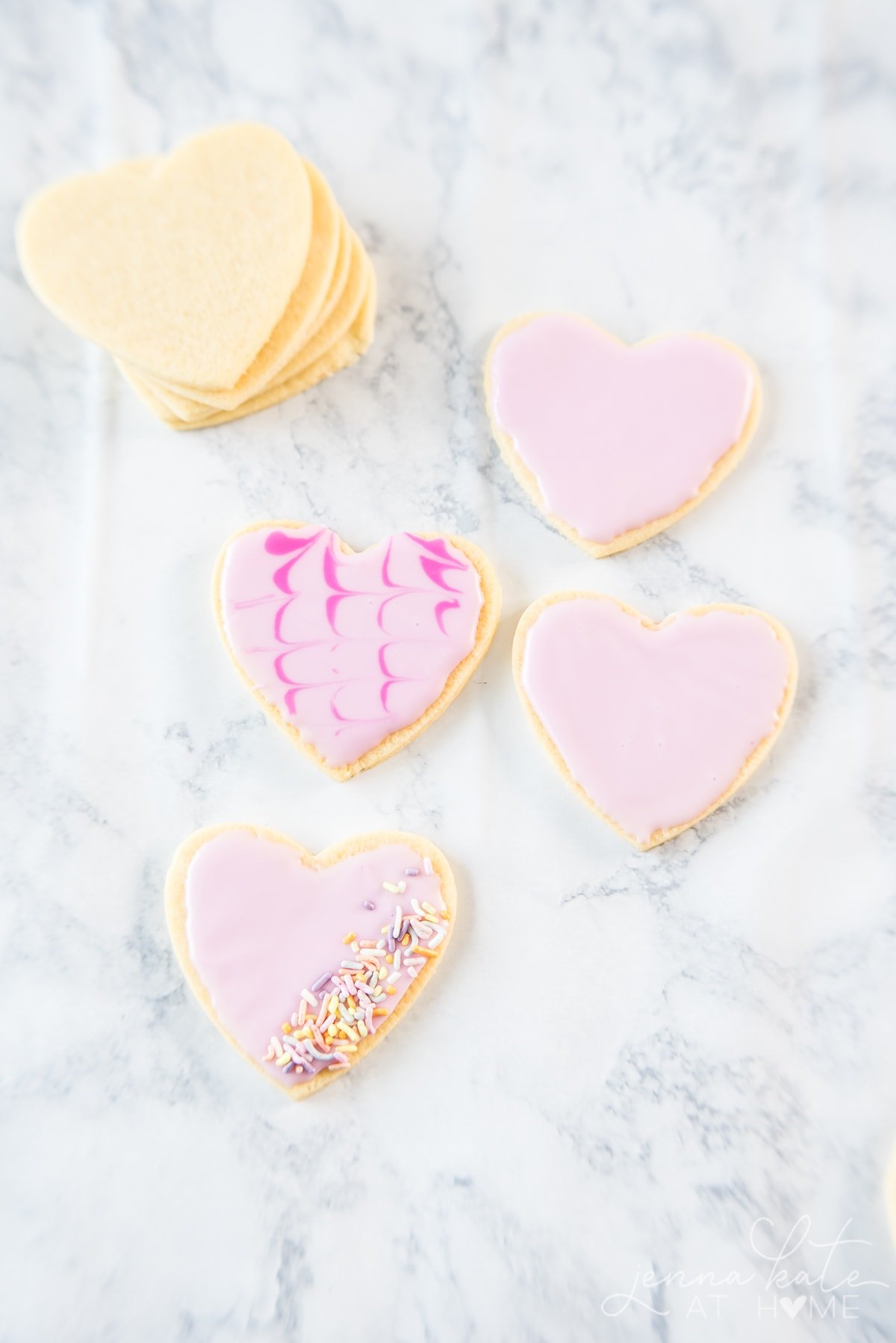