Hey! Thanks for checking in on Week 2 of the ORC (One Room Challenge) where this time around, I've decided to renovate my basement! If you haven't already seen Week 1, best do that first!

Table of Contents show
1 Moving along to the other side of the basement - the family room...
2 Tile
3 The Couch

Since last week, a lot has happened! 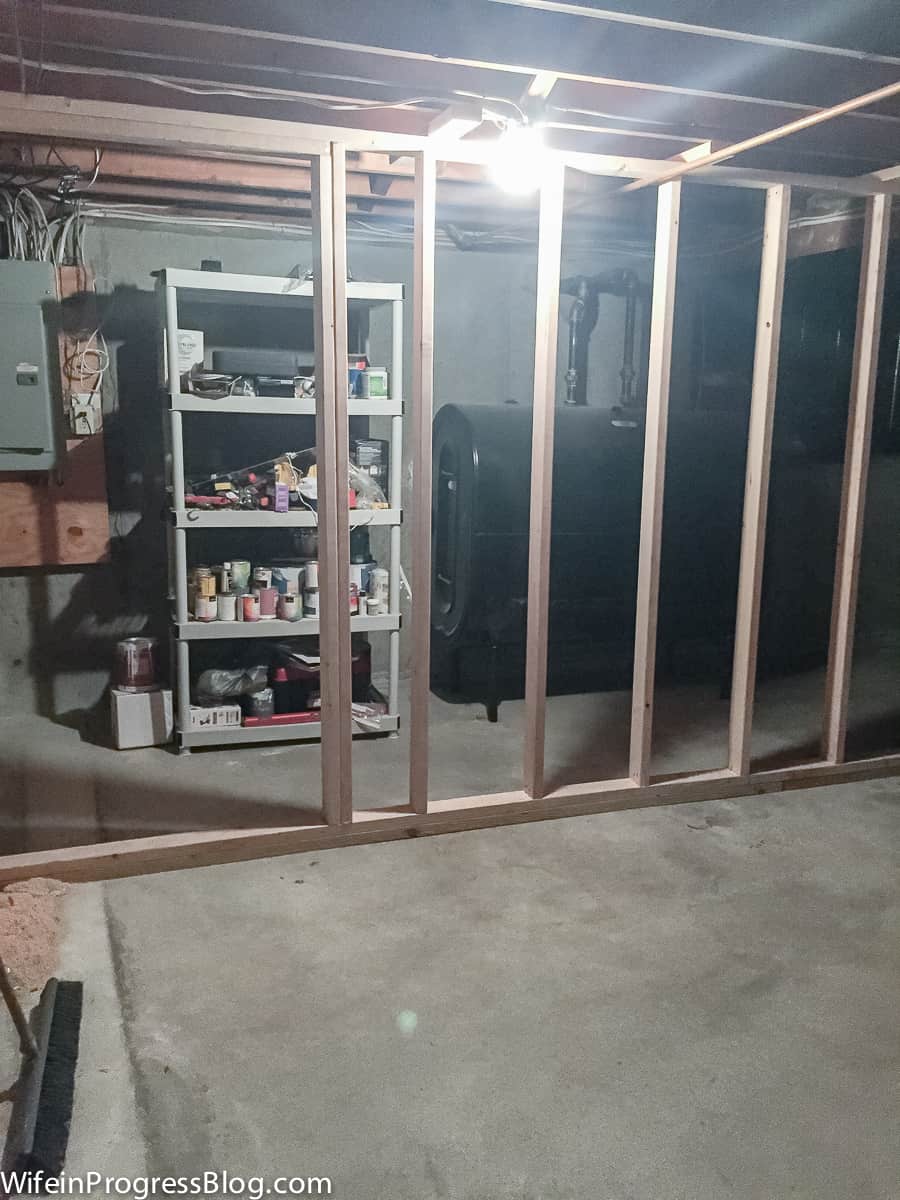 The very first thing was the walls being framed in on the unfinished portion of the basement that will become our son's playroom. 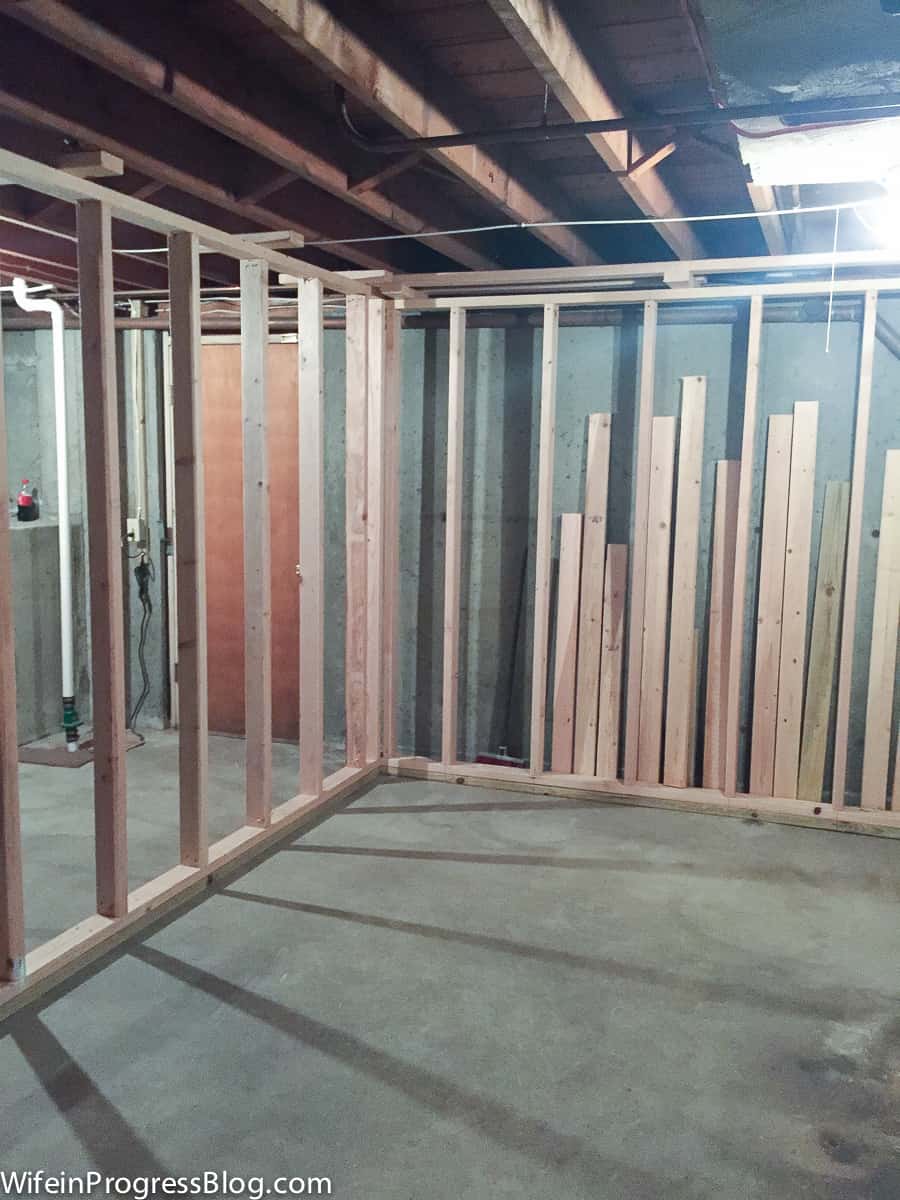 Once all the studs were in place, the electrician was able to come in and get some wiring done. 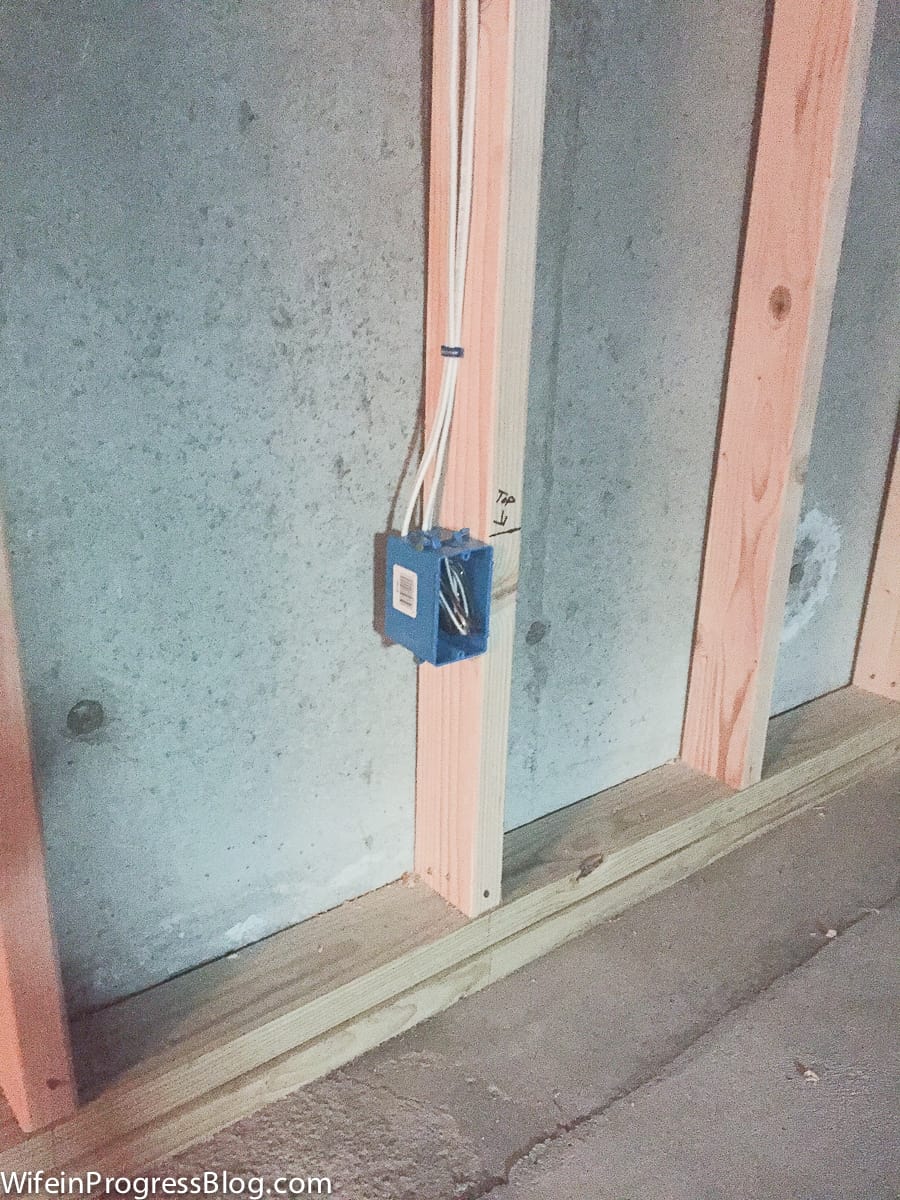 He had about a full day's worth of work in this part, since there was no electrical here at all. We had him run a bunch of outlets, cable and the initial wiring for the recessed lighting. Those lights can't be installed until our ceiling is in place and some plumbing has been moved, so he will be coming back again towards the end of the job. 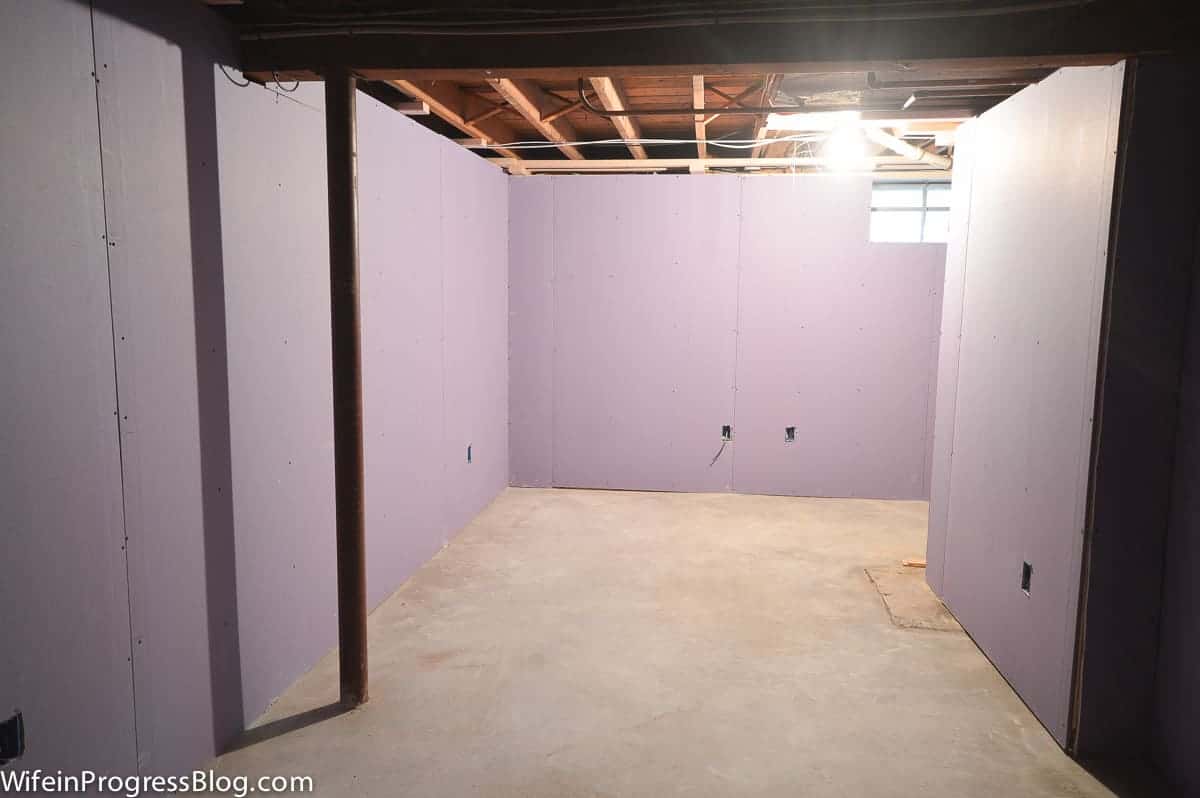 Once the wiring was run, the drywall went up! This is my favorite part so far! It's so nice to finally be able to get a sense of the dimensions of the room and to know that it's NOT too small or narrow. In fact, it's the perfect size for a playroom! 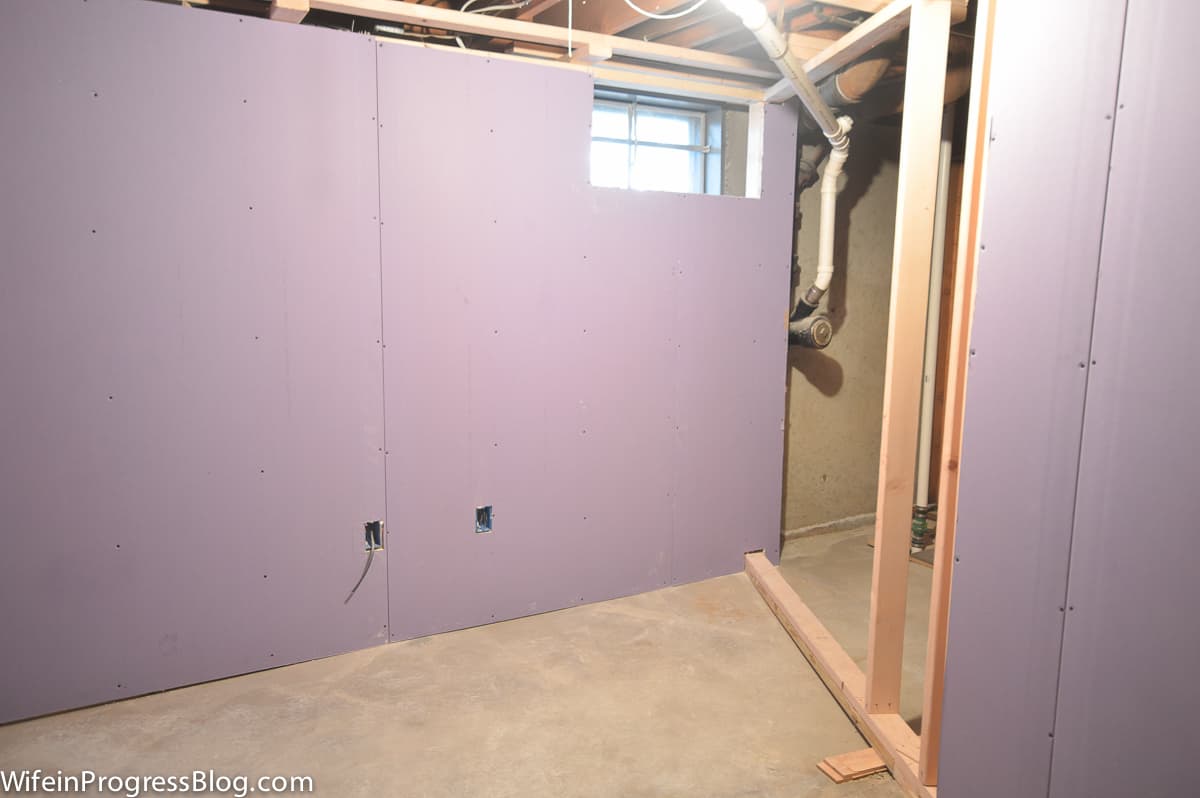 There's some funny plumbing situations that will need to be fixed before in the corner above before the rest of the walls can be finished. 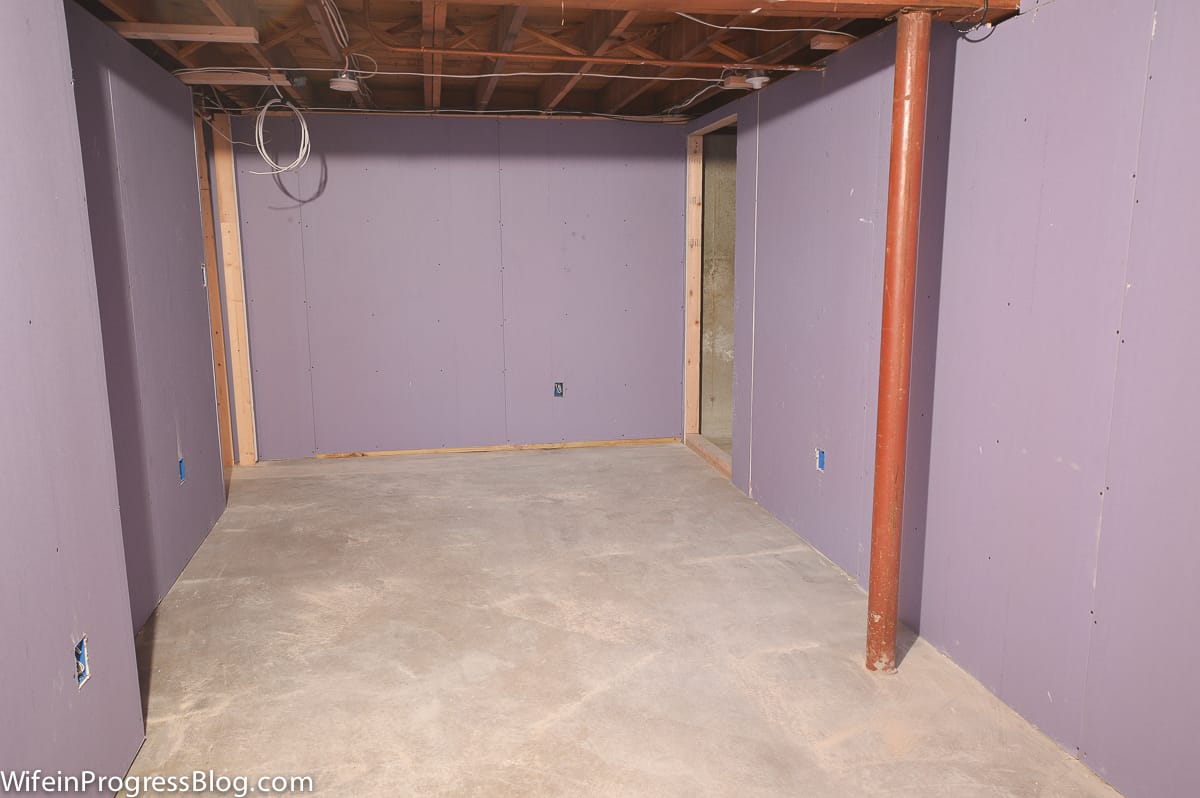 See that lally column? The original plan was to box it in with some pine and trim it out. Now that the drywall is in, though I'm picturing Cian getting his head stuck between the column and the wall. So I think I'm going to have Matt, the contractor, bump it out with drywall. When it's painted to match the rest of the room, I think it will blend in with everything else.

Moving along to the other side of the basement - the family room...

The original plan was to remove the panelling in the "finished" part of the basement before installing new drywall.  Unfortunately, our contractor is worried that if we remove the panelling we could be opening up a can of worms due to how it was originally installed. Anyway, it's all nice and secure now, so instead of pulling it all off, we are going to go ahead and install the drywall right over it.  Not such a big deal, really. In fact, it saves us money since there's less labor involved. 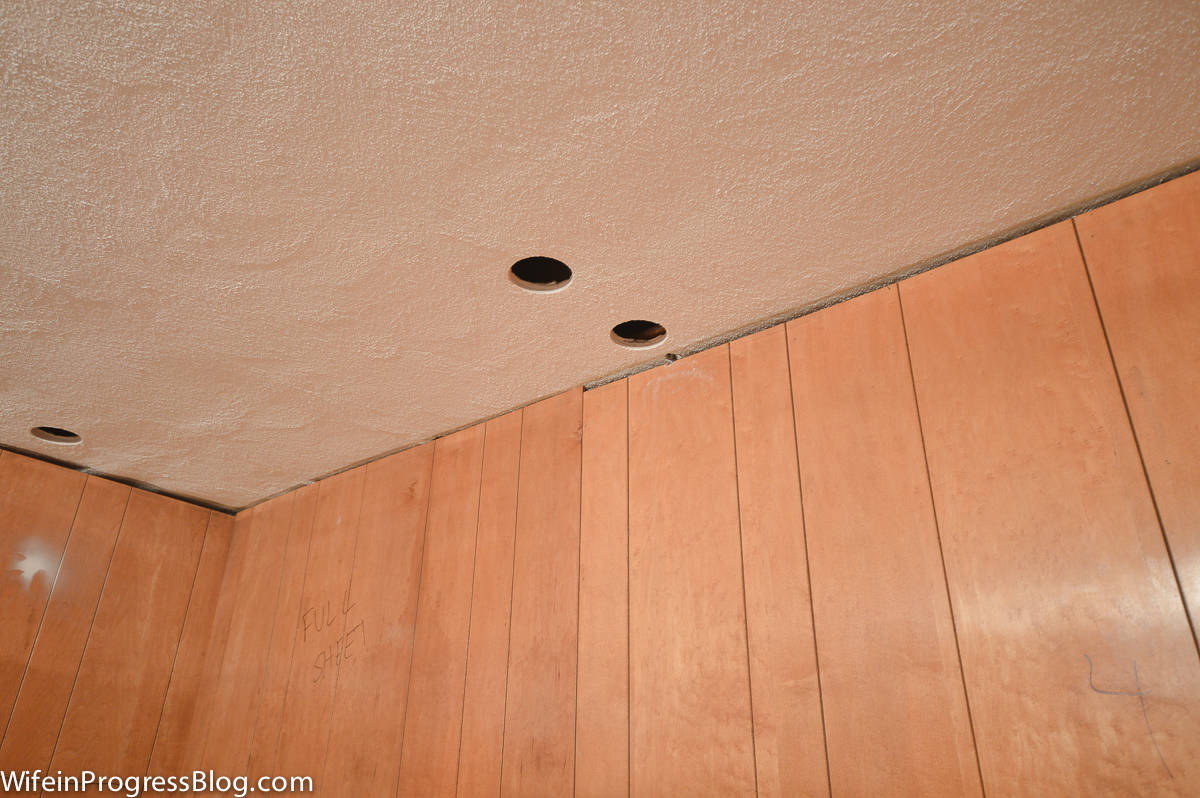 Currently, this room only has two outlets. In order to bring that situation up to code (and because we need a lot more than 2 outlets!) the electrician needed to drill through the ceiling in order to drop down the wiring. Unfortunately, any money we saved from not removing the panelling now goes to replastering the ceiling. Bummer! 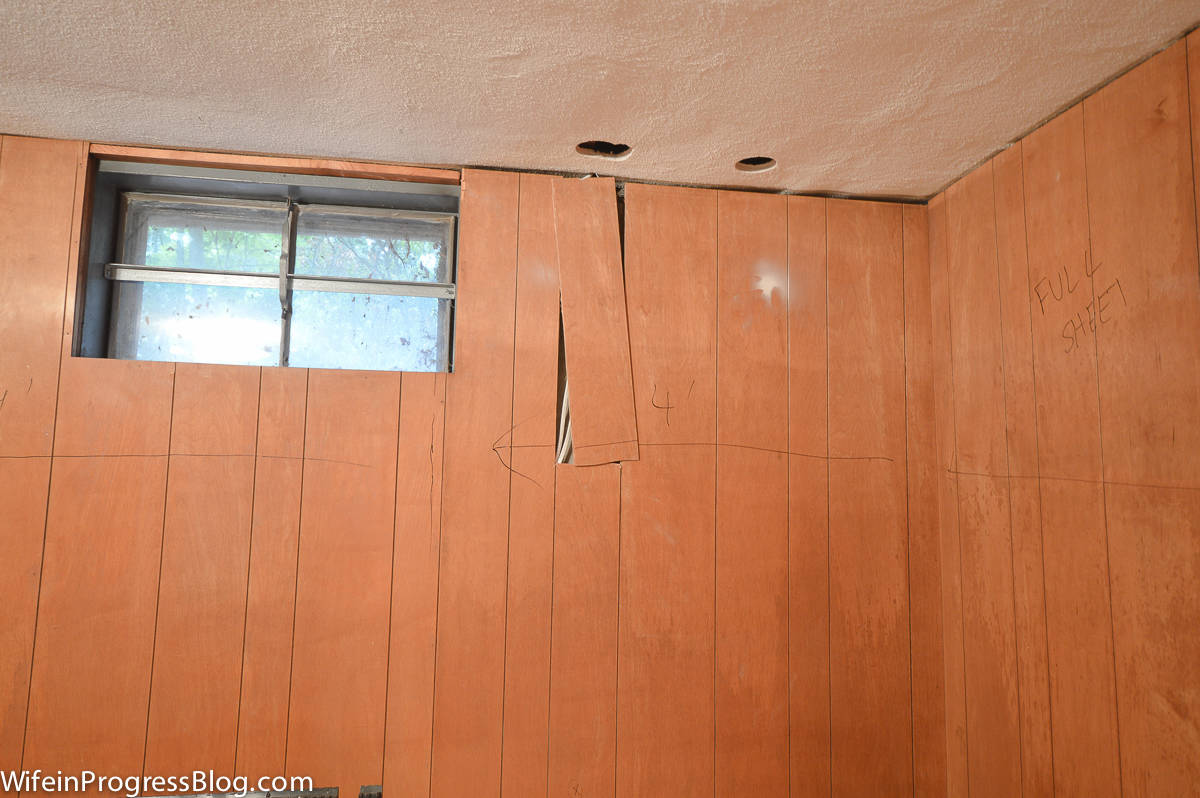 Next up in here, attach the drywall!

How about looking at something a little prettier? If you've been following me on Instagram, you may have seen this post: 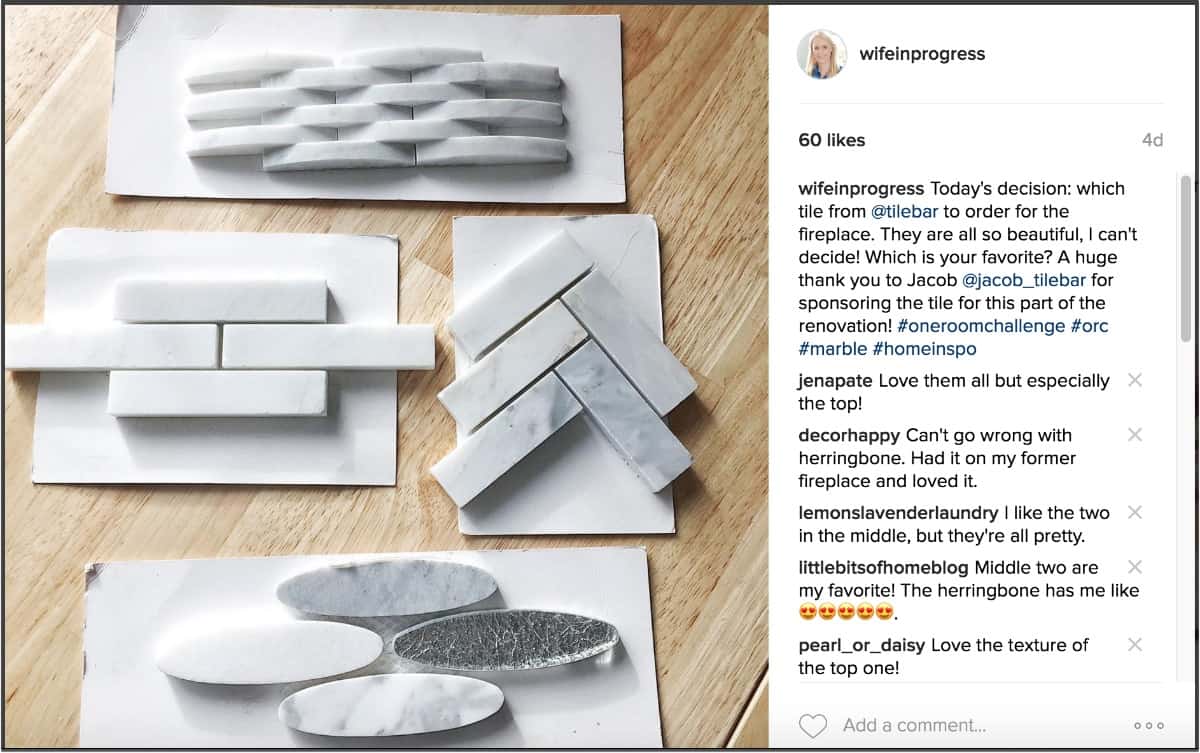 The lovely folks at Tilebar.com agreed to sponsor the marble tile for the fireplace, which I'm absolutely thrilled out. Above, you can see the samples I had shipped to me. Aren't they all divine?

The interlace tile seemed a little fussy and Brian thought the bottom one was "too girly". At the end of the day, it is a family room so I kind of agreed with  him.

In the end, it came down to the brick pattern or herringbone. Can you guess which one I ultimately ordered? You'll have to check back next week to find out!

Another design decision that has been made (and ordered) is the navy blue couch! Let me tell you - there's some really beautiful couches out there. Let's take a look at some of the ones I debated purchasing. 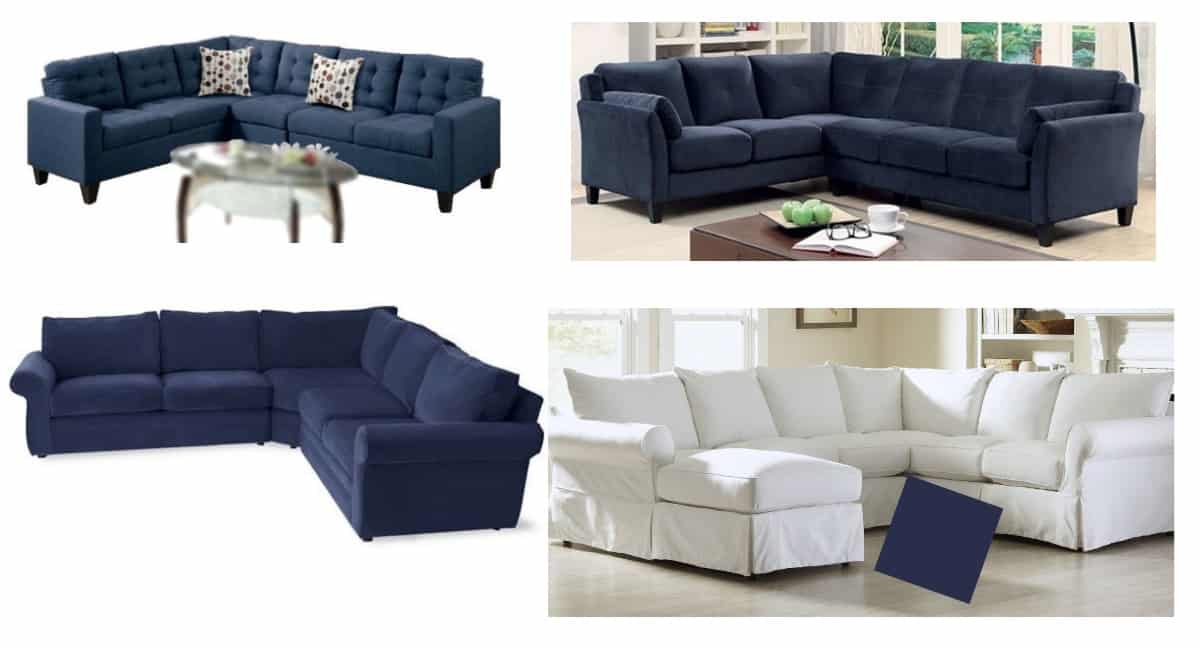 When spending anywhere upwards of $1500 on a couch - you want to know that you love everything about it. So, I chickened out with buying it online and instead we went to our local furniture showroom and custom ordered a couch from there. Want to know something funny? The last 3 couches we've bought have ALL been the same brand.  Apparently we are very drawn to Jonathan Louis couches! 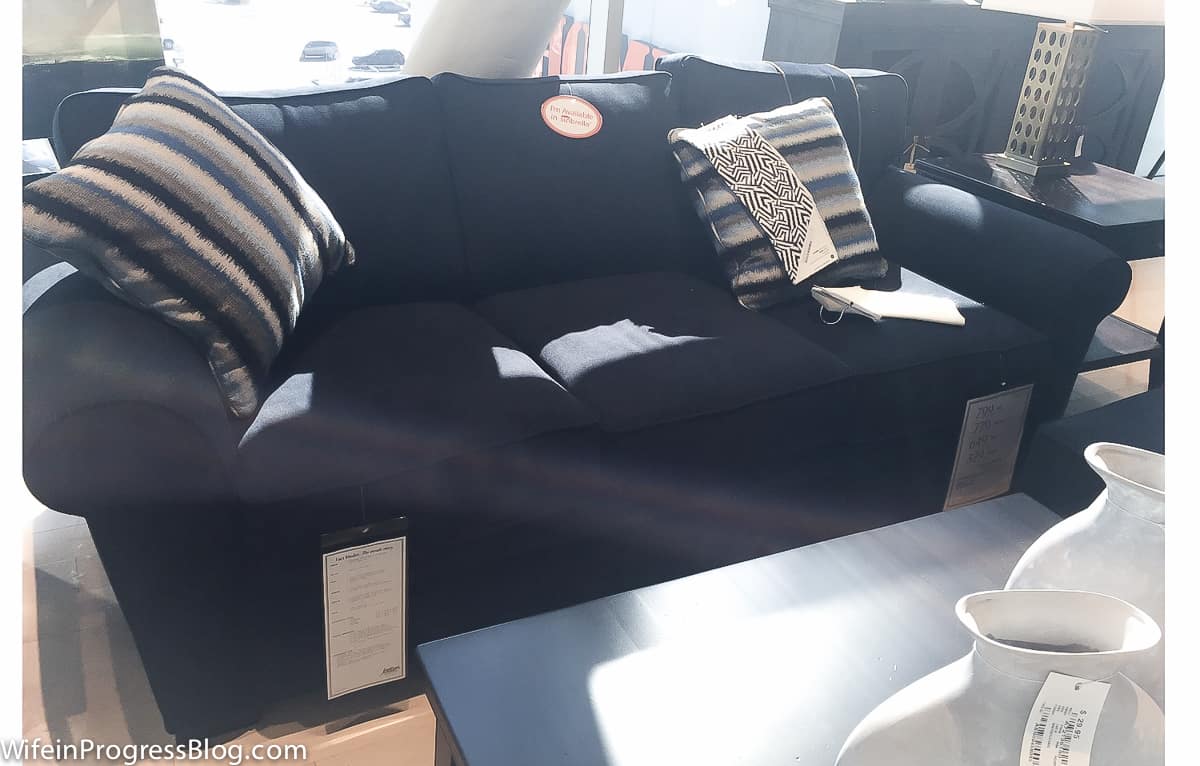 I only have a crappy iphone pic - but it should give you an idea of what it looks like. The couch in the showroom was just a regular 3-seater couch but we ordered the same one in a sectional. Look at those big rolled arms! LOVE IT!!

That's it for this week updates! Next week I'm hoping that all the drywall will be up in the other side, and that all the seams will be taped and mudded (three coats!) and that we will have some work at least started on the fireplace!

For now, don't forget to check out the other Guest Participants as well as the 16 Official Participants.