Today kicks off the first of some wonderful guest posts while Jenna is out on maternity leave.

Hi, it’s Jas from All that’s Jas and today I am sharing with you my recipe for a rustic Easter lemon raspberry rare cheesecake.

You know when you try a new recipe and you like it so much you have to make it again asap? That happened to me when I made my first rare cheesecake.

None, except when you eat two cheesecakes in one week your clothes don’t quite fit the same anymore. Being a cheesecake addict, and I have cholesterol levels to prove it, I shouldn’t be allowed near one, much less two.

But here’s the good news:
It was worth it. The silky texture is unforgettable and the pairing of lemon and raspberry is one of my favorite fruit flavor combinations. Not to mention the two layers, my all-time must have in cheesecakes. The most popular by far is my tiramisu cheesecake, but layered maple cheesecake and baklava cheesecake are the second best. The other ones I made aren’t so bad either, if I may say so myself.

So, why is this cheesecake called rare?

Japanese call no-bake cheesecake a rare cheesecake (if you’ve ever ordered your steak rare, it’ll make sense to you). Now, I could’ve named my cake no-bake cheesecake, but I have to keep up with the trend, and rare is in right now. Besides, Japanese use gelatin to harden the filling and they also use yogurt* instead of the heavy cream (I mixed yogurt and heavy cream because I’m using lemon and didn’t want the cake to be too tart. Also, this cake is not overly sweet as traditional cheesecakes are).

I followed their basic rare cheesecake recipe, so there you have it.

The cheesecake is simply decorated but looks gorgeous! 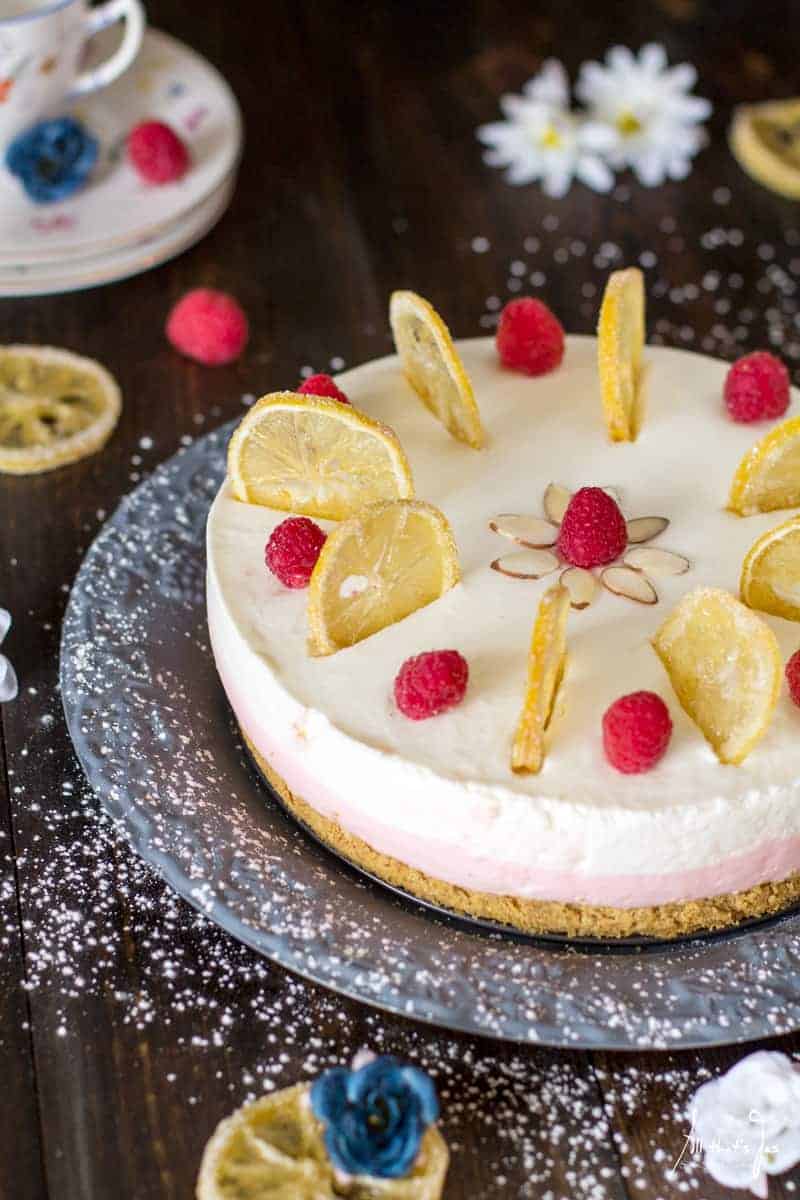 If you liked this rare cake, I’m sure you will like my Valentine’s Day Rare Cheesecake too.

Have a specific decorating question? Newsletter Subscribers Can Join the Home in Progress Decorating Community
. Questions pertaining to individual situations will no longer be answered in this comments section

I'M THE VOICE BEHIND THIS BLOG AND LOVER OF HOME DECORATING, CREATING & BAKED GOODS. I'M HERE TO SHARE MY BEST IDEAS TO HELP MAKE YOUR HOUSE A HOME.

Are you planning on doing some baking this weekend

Surprise! I added some new wallpaper to the bathro

Clipped some forsythia from my neighbor’s yard t

Being cooped up in the house for the foreseeable f

Wow you guys! I’m just blown away by all your am

Here it is! The boys’ bedroom makeover!! I’m s

Somehow - amidst all the craziness of the past few

What are you planning to do to keep your kids occu